Arabic Numerals and the Star and crescent

There is some evidence which suggests that the numerals in their current form developed from Arabic letters in the western regions of the Arab World.[6] The current form of the numerals developed in North Africa, distinct in form from the Indian and eastern Arabic numerals. It was in the North African city of Bejaia that the Italian scholar Fibonacci first encountered the numerals; his work was crucial in making them known throughout Europe, and then further to the Europeans who spread it worldwide. The use of Arabic numerals spread around the world through European trade, books and colonialism. Today they are the most common symbolic representation of numbers in the world.

From Wikipedia, the free encyclopedia 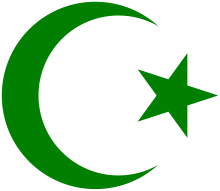 A typical presentation of the star and crescent.

A star (or stars) and crescent featuring in some combination form the basis of symbols widely found across the ancient world, with examples attested from the Eastern Mediterranean and Central Asia.[1]

The early Muslim community did not have a symbol. During the time of prophet Muhammad, Islamic armies and caravans flew simple solid-coloured flags (generally black, green, or white) for identification purposes. In later generations, the Muslim leaders continued to use a simple black, white, or green flag with no markings, writing, or symbolism on it.[2]

During the 19th century, it represented the Ottoman Empire, figuring on the Ottoman flag from 1793. The Ottoman flag of 1844 with a white “Ay-yıldız” (Turkish for star-crescent) on a red background continues to be in use as the flag of the Republic of Turkey. Other successor states of the Ottoman empire also used the symbol, including Libya (1951–1969 and after 2011), Tunisia (1956) and Algeria (1958).

During the 1950s to 1960s, the symbol was re-interpreted as symbolic of Islam or the Muslim community.[3]

By the 1970s, this symbolism was embraced by movements of Arab nationalism or Islamism, such as the proposed Arab Islamic Republic (1974) and the American Nation of Islam (1973).[4]